One of the most basic needs of cryptocurrency users is to send coins to other wallets or to make payments.

To send DCRs you must first have DCRs. Learn more reading How to obtain Decred?

In this scenario Alice wants to send 0.1 DCR to Bob. Both use Decrediton, Alice on macOS and Bob on Debian Linux. Both are connected to the Testnet. Learn more about the testing environment reading Testing Decred on Testnet.

The reason why we use Testnet is very simple: every transaction has a cost, a fee to be paid to miners. In the Testnet it is possible to reproduce what would have been done in the Mainnet, without the cost. All steps shown here would be the same on Mainnet, the real world. With minor differences: the real addresses start with ‘Ds’ instead of ‘Ts’ and the block explorer of Mainnet is https://mainnet.decred.org while on Testnet is https://testnet.decred.org/.

Alice opens her Decrediton and verifies that she has a balance of 2 DCRs. Alice received this balance on the exercise of article Testing Decred on Testnet.

The version of Decrediton app shown here is 1.1.3. 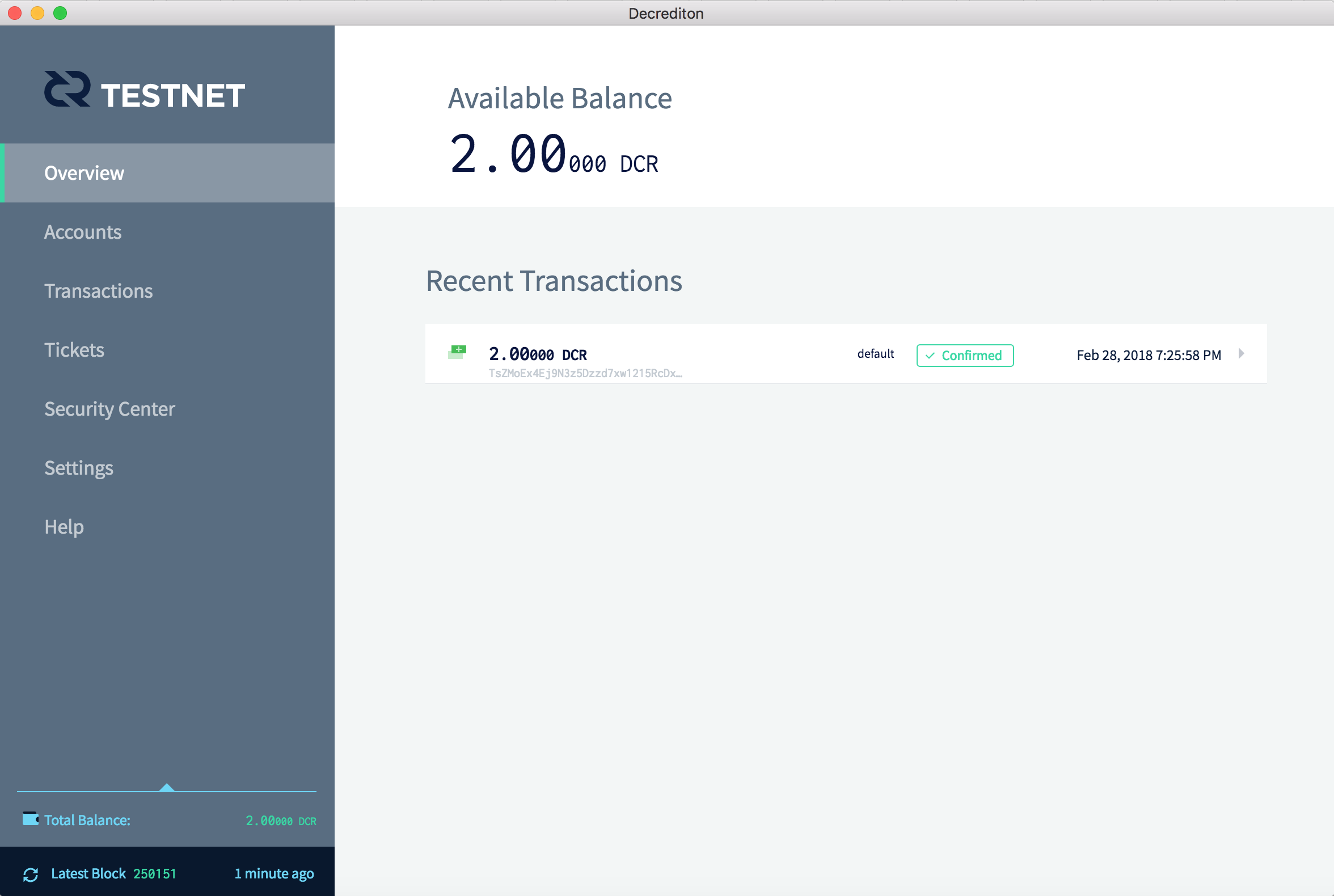 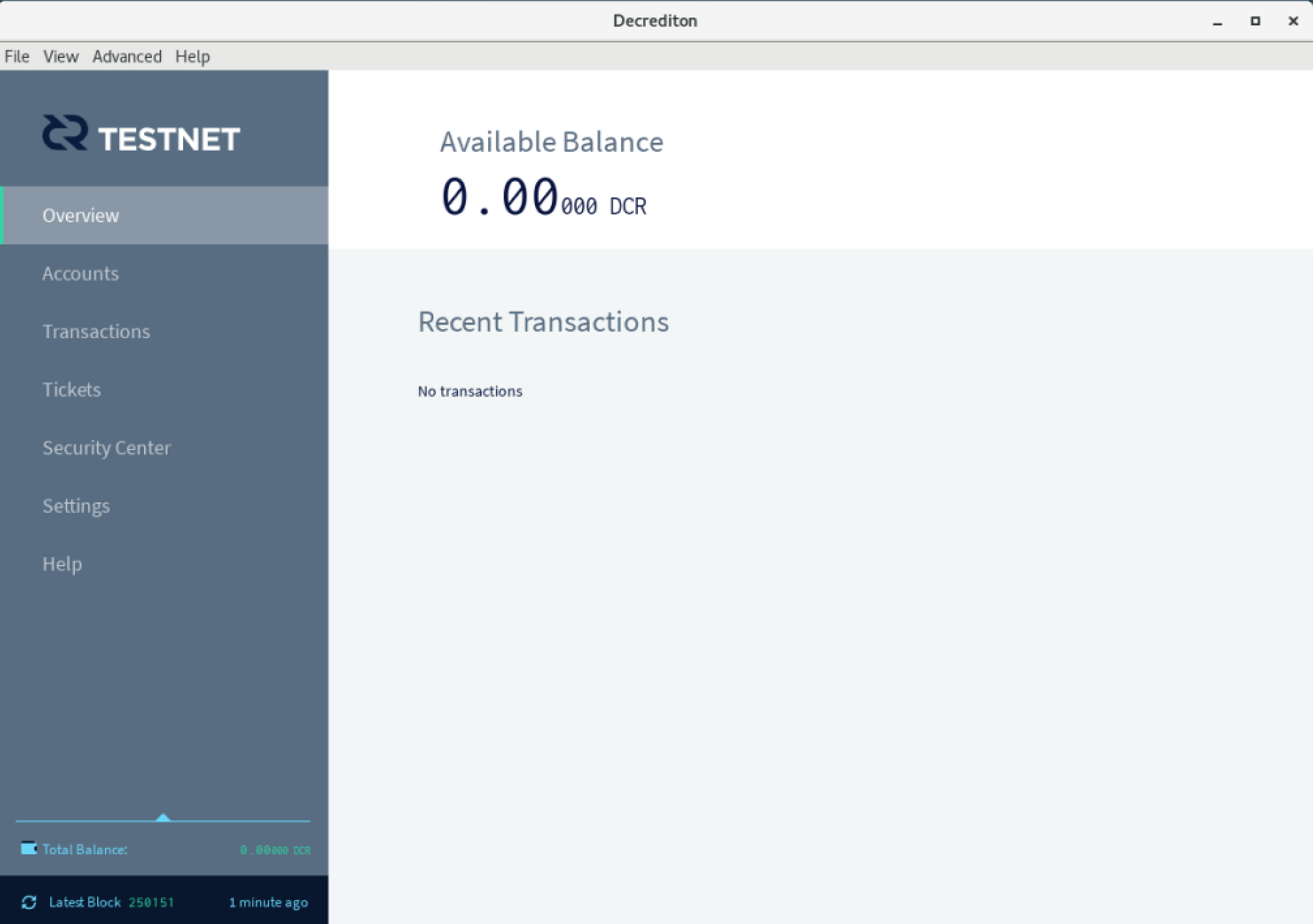 Bob accesses the “Transactions” menu on his Decrediton, goes to the “Receive” tab, and generates a new receiving address by clicking on the blue button “Generate New Address”. This address will be sent to Alice.

Alice receives the address sent by Bob. She opens her Decrediton on “Transactions” menu, goes to the “Send” tab and pastes the received address in the “To” field with the “Amount” of 0.1 DCR. Alice clicks the blue button “Send”. 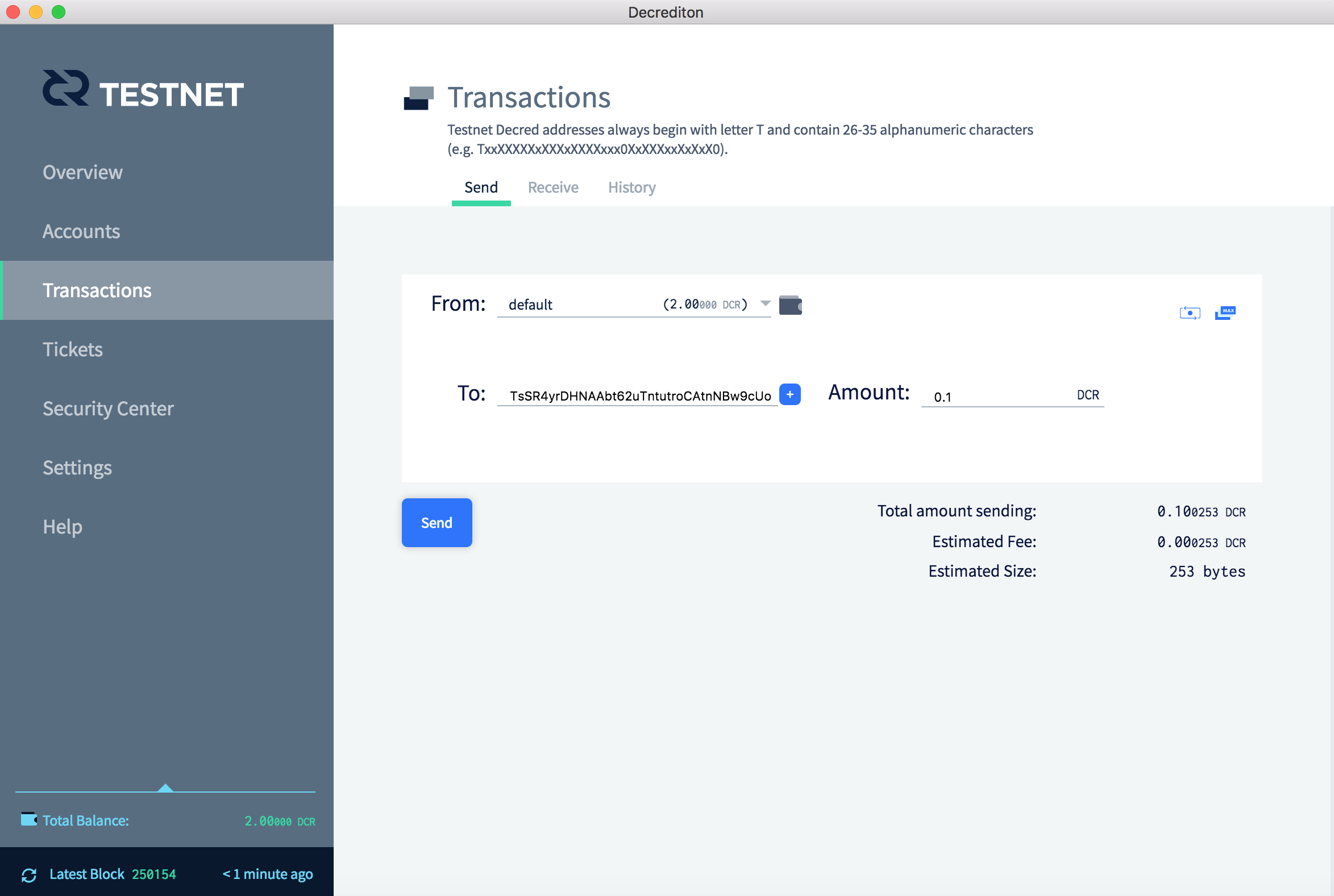 Decrediton asks for Alice’s wallet passphrase. The passphrase is needed to sign the transaction with Alice’s private key, that is protected. 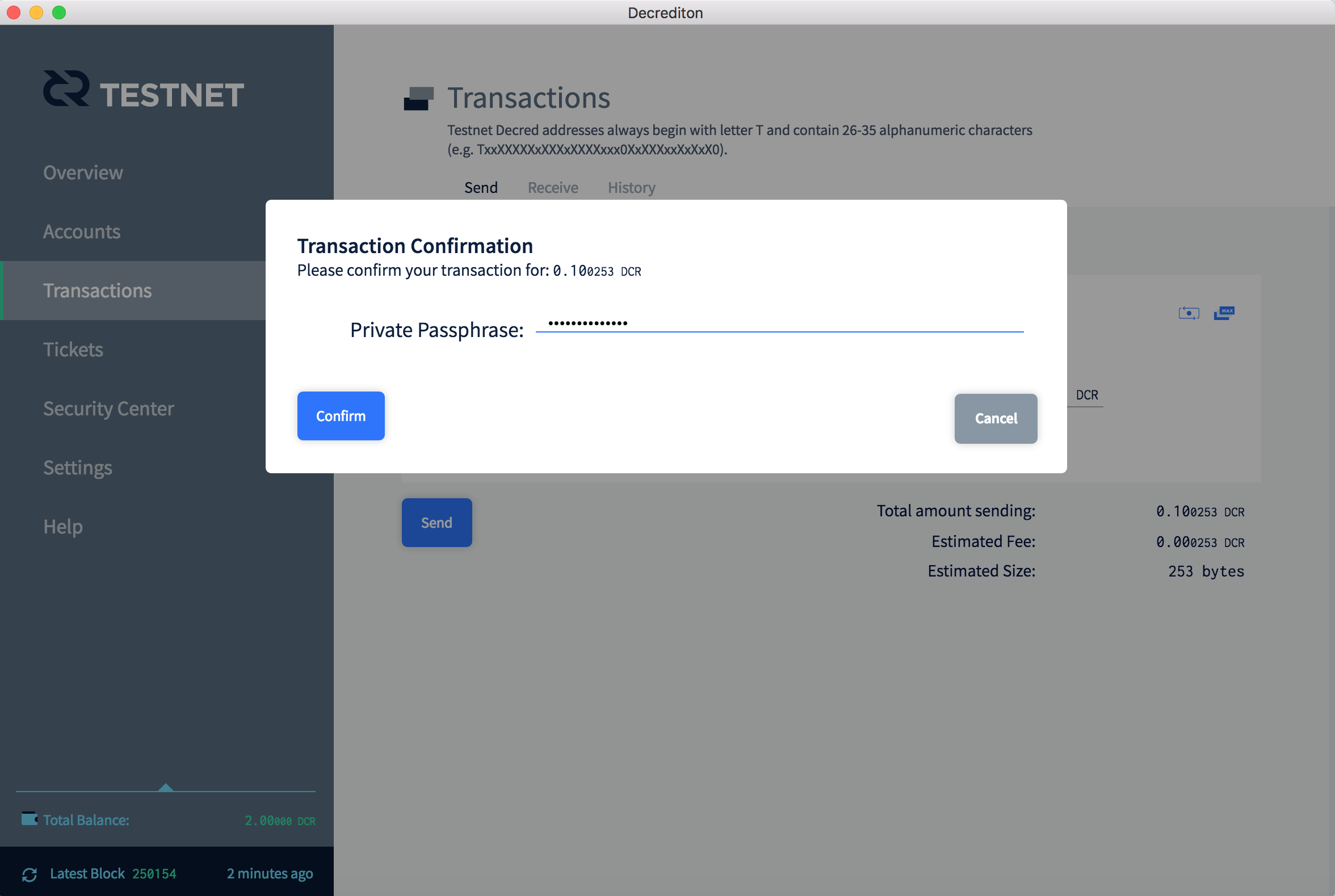 Having the transaction signed with Alice’s key, Decrediton sends it to the network servers. The transaction is still marked as Pending. 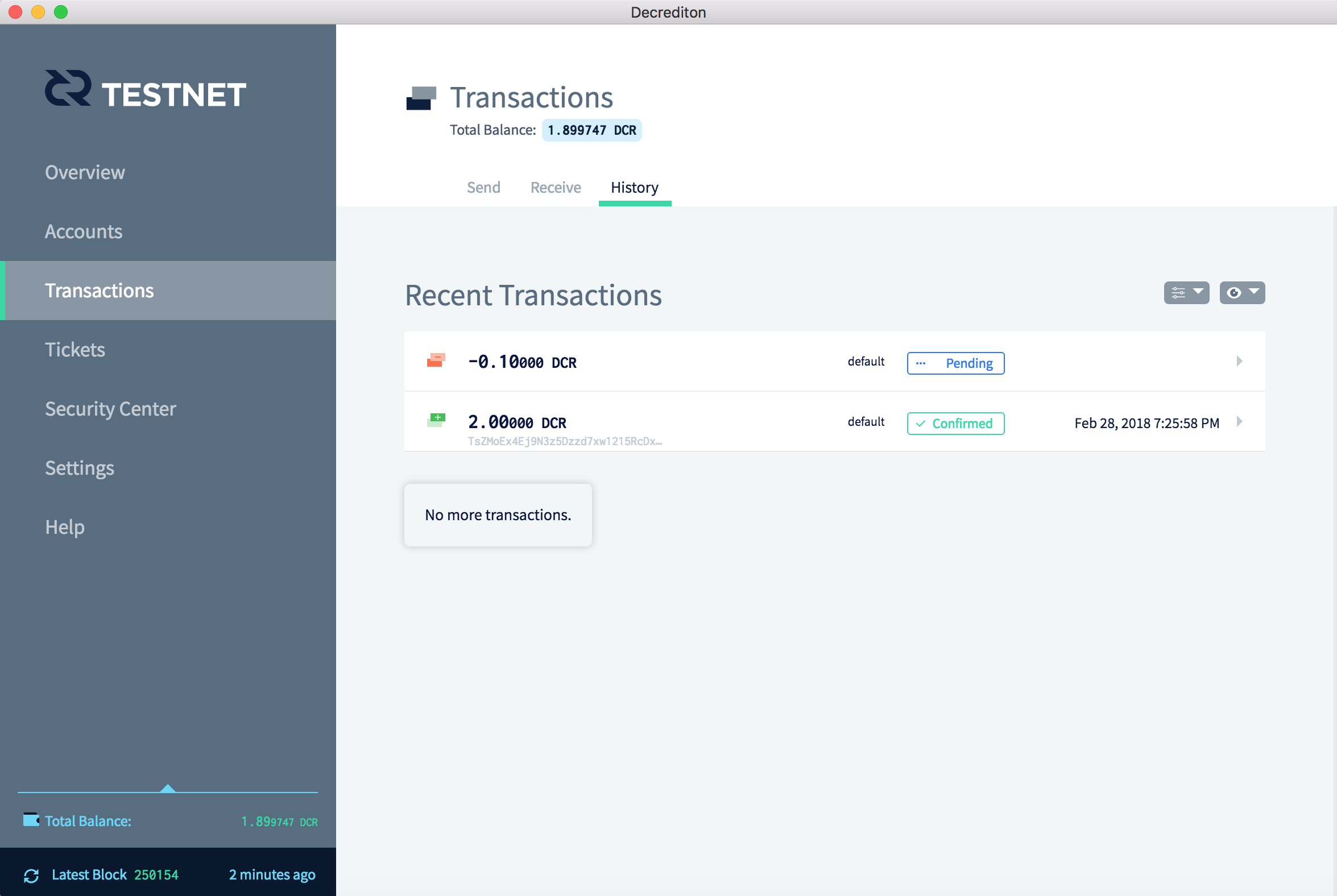 Figure 7 - A pending transaction is shown to Alice

On his Decrediton, Bob notices that Alice has already sent the transaction to the network, but it hasn’t yet been confirmed. 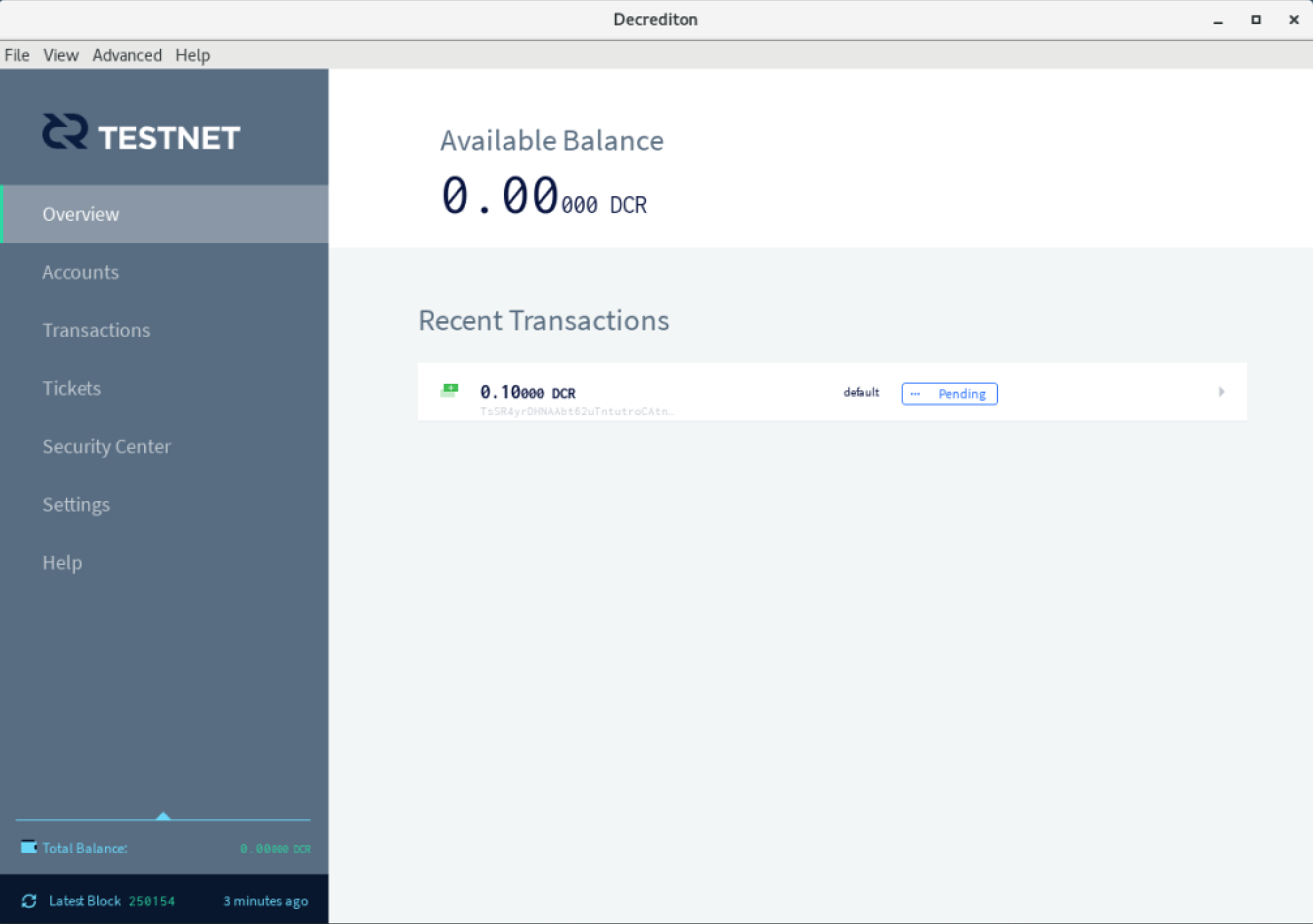 Figure 8 - Bob sees the same pending transaction in his Decrediton 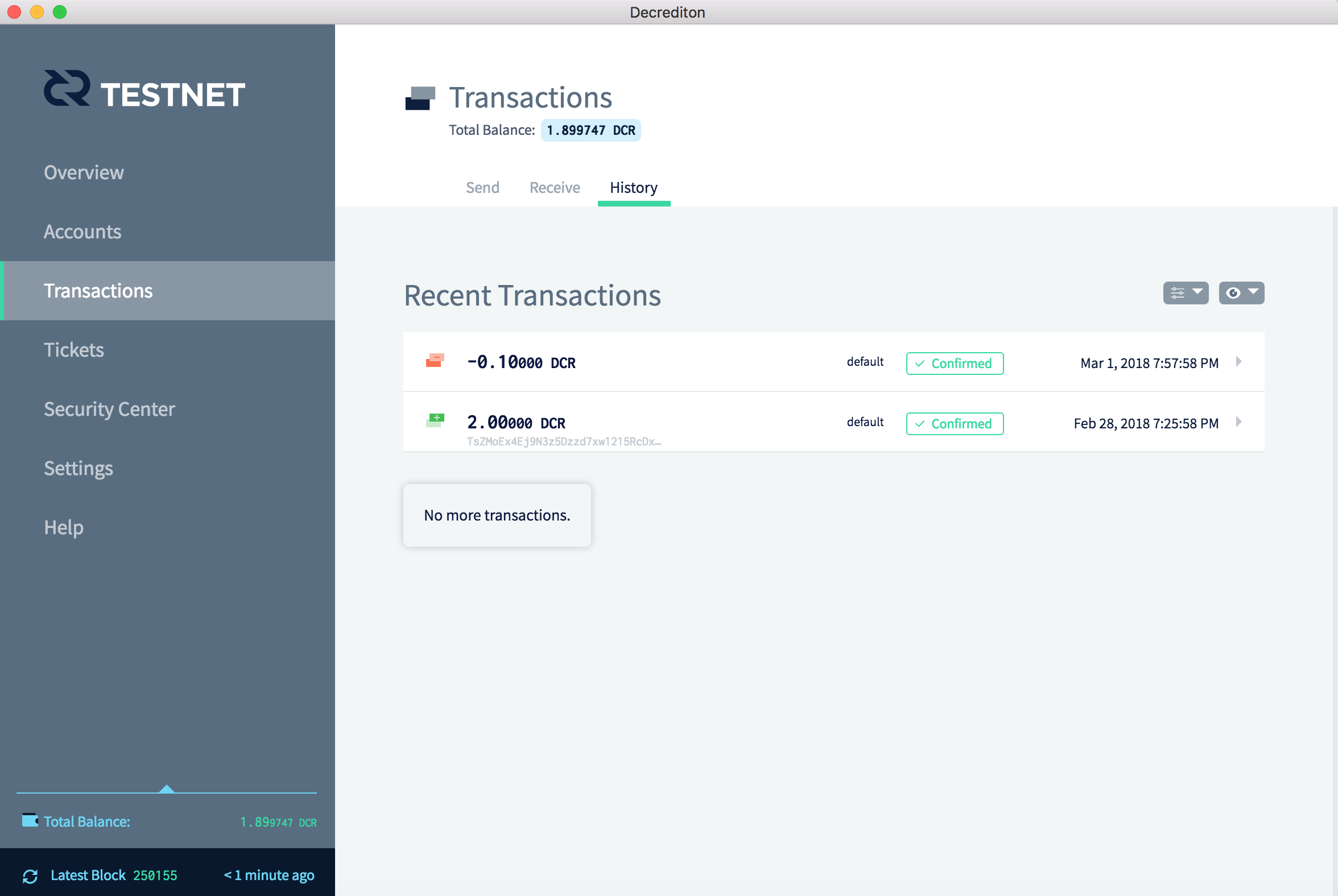 Alice learns more details about the transaction. One of them is the transaction ID, shown in the next figure as “Transaction” on the top of the window.Alice clicks this identifier, this long sequence of letters and numbers. 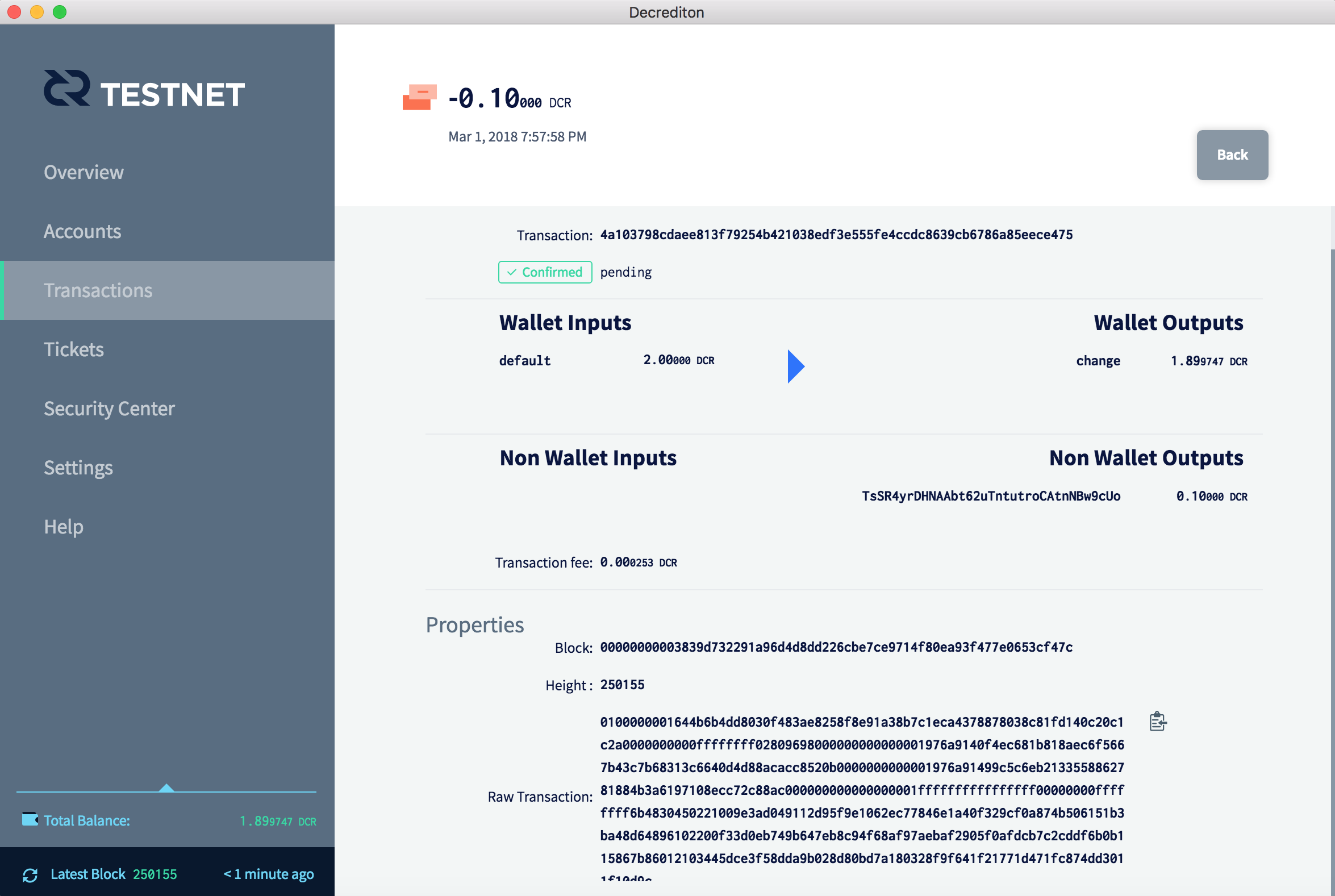 Figure 10 - Alice clicks the transaction ID, on the top of the window

Decrediton takes Alice to the webpage of the block explorer where she will be able to track the propagation of this transaction on the network. Alice clicks the + icon on the left of the transaction ID.

On the left lower part of the page there is a fee, that amounts to 0.00025300 DCR, paid to the miners for including this transaction on the block.

The sum of the subtotal with the fee totals 2 DCR, the same 2 DCR shown on the left of the page, besides the address written in blue. 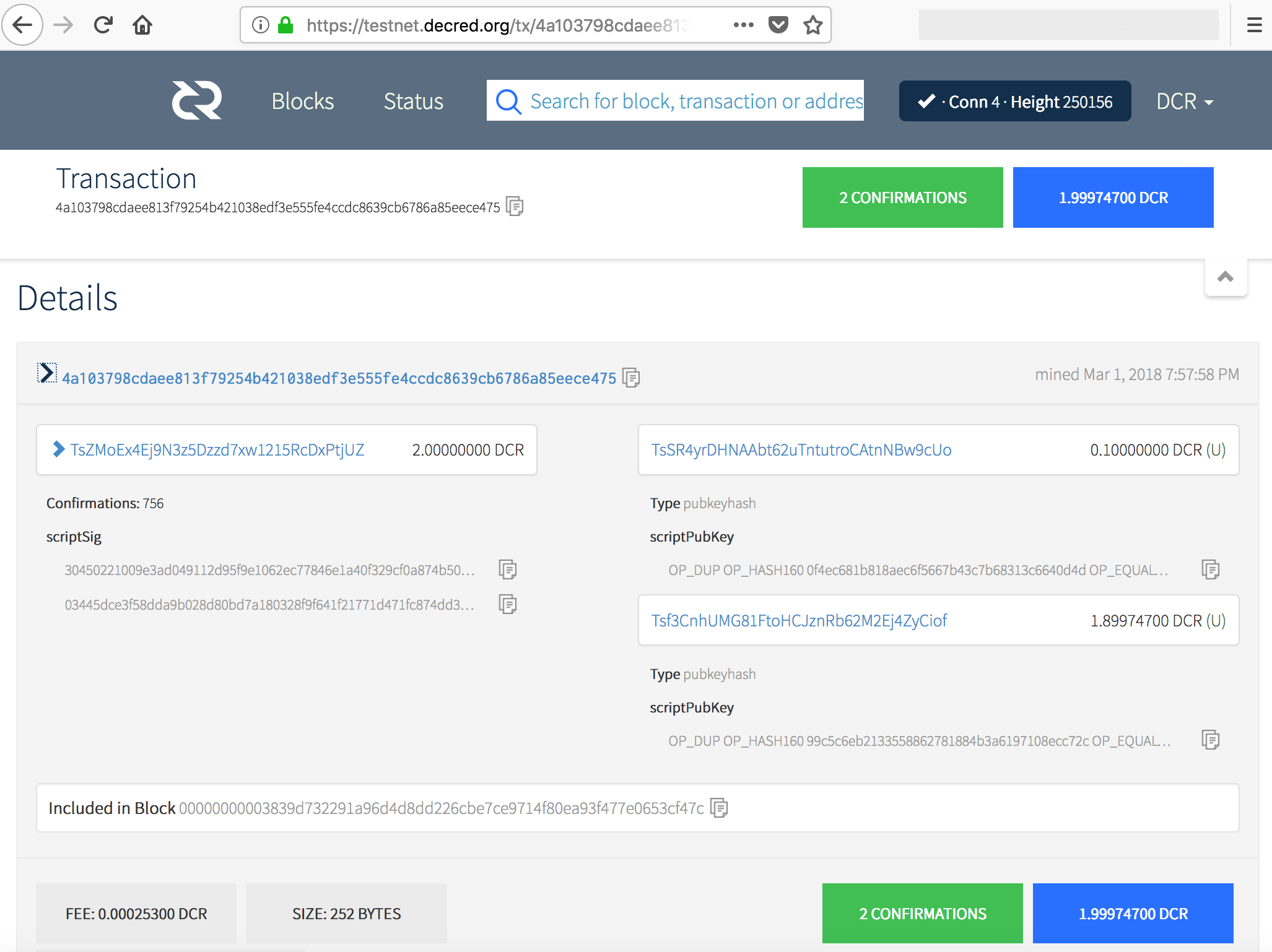 On his Decrediton, Bob sees the confirmed transaction and his balance. From now on, Bob can already spend part or all of his balance making new transfers. 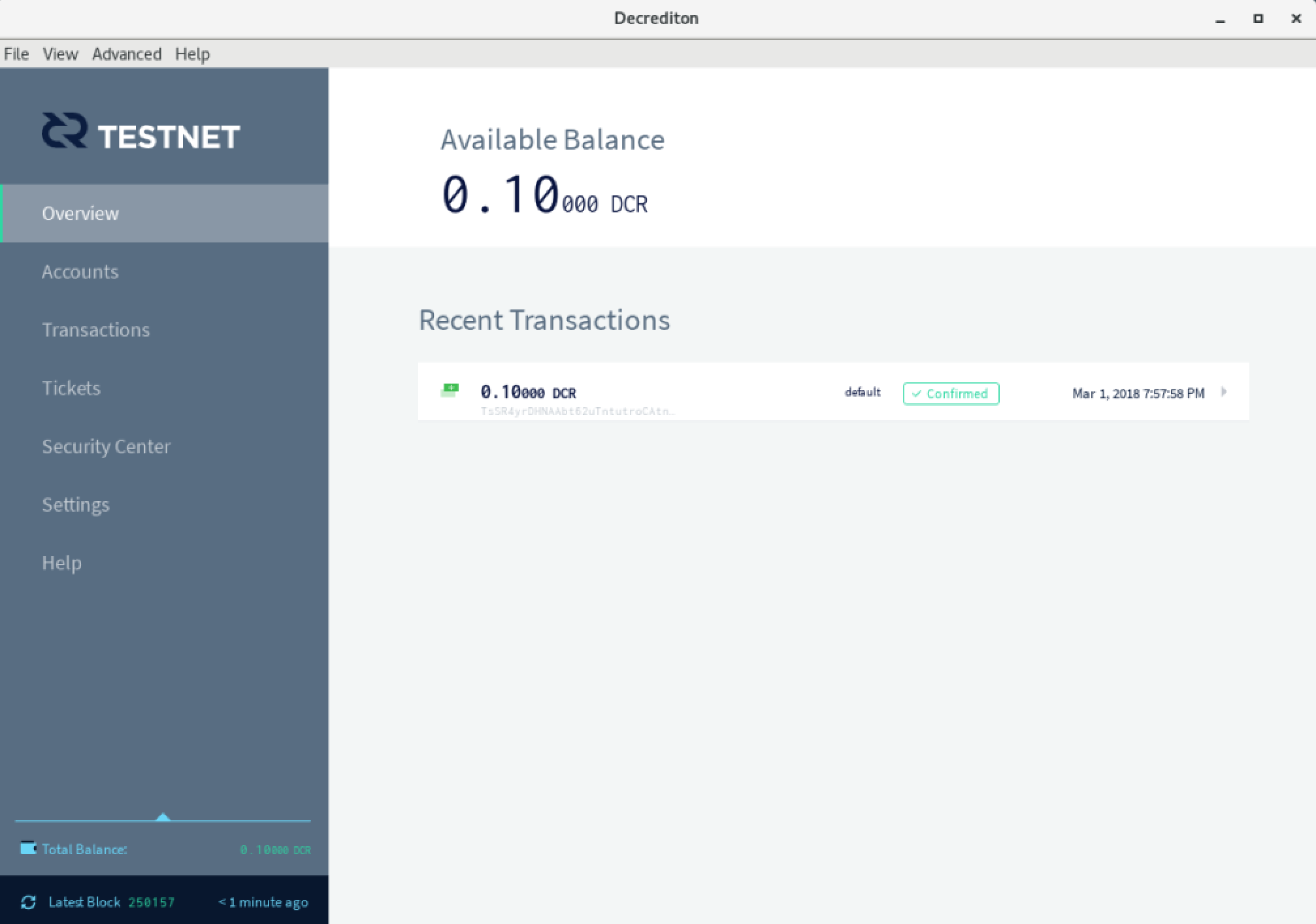 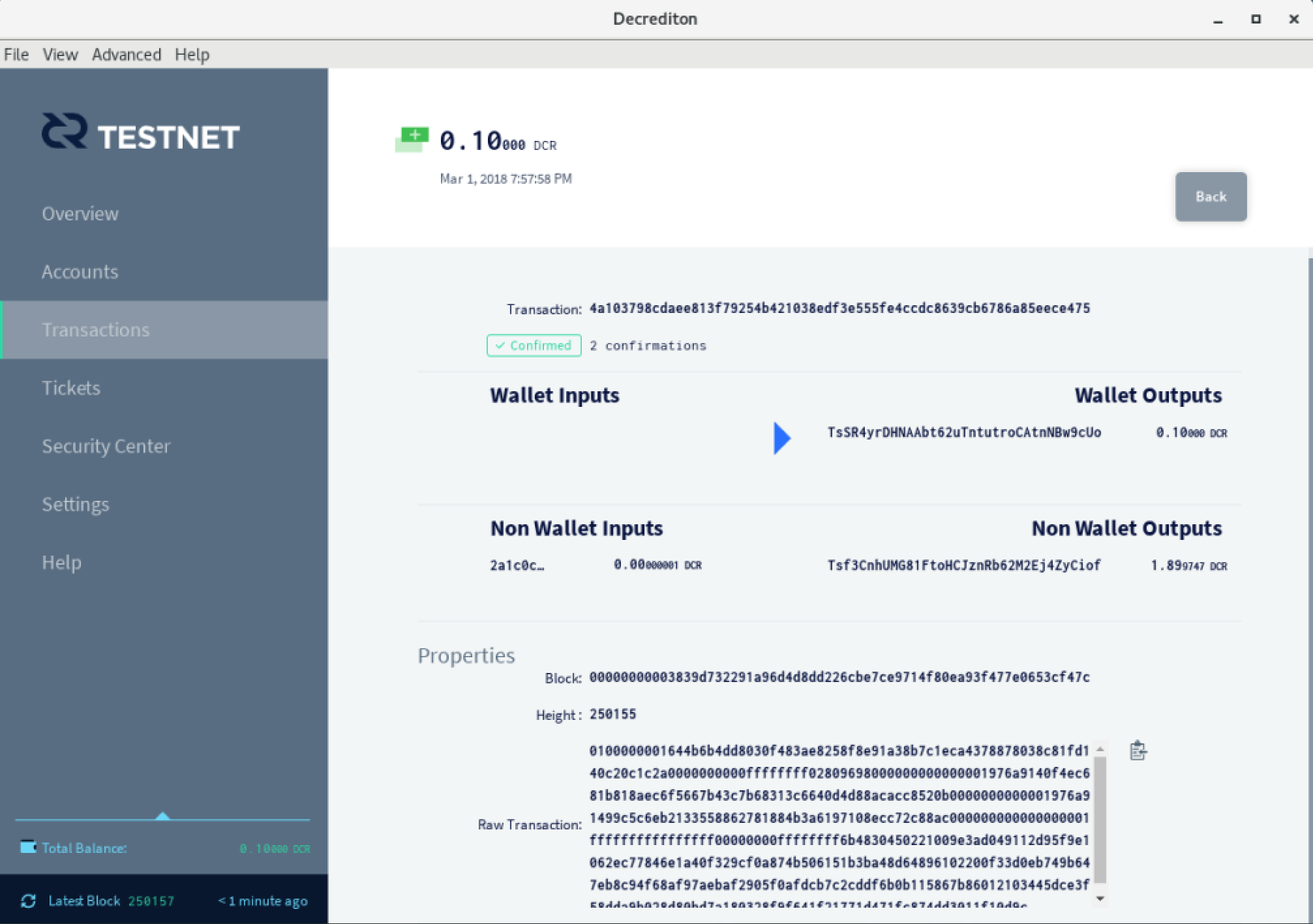