Don’t install or use software without first verifying its digital signature.

The verification of digital signatures ensures that a message wasn’t altered and that the sender is the one who ‘signed’ the message, the owner of the key pair.

If a message (or a file in any other format) has been modified in its origin or while in transit, the hashes will be different, and in this case (if the hacker published new hashes for the message), the hashes won’t have a valid digital signature.

Read a brief notion of cryptography to understand the basics of the process.

In other words: If the hacker modifies the executable, its hash will be different from the hash in the manifest; if they are equal (in case the hacker also modified the manifest, because both are stored in Github), the digital signature of the manifest will be invalid because the manifest was signed with Decred developers’ private key, inaccessible to the hacker. The hacker would have to change the public key in MIT servers, where Decred developers’ public key is stored, and also the Github webpage with the instructions to import the correct public key (because the ID will change if the hacker decides to use his own key). Even going through all this trouble, it would work only for those who import the public key after the hacker replaces it with his own.

2. How does the digital signature work

It is the output of a mathematical function that always returns a fixed length sequence regardless of the size of the input. 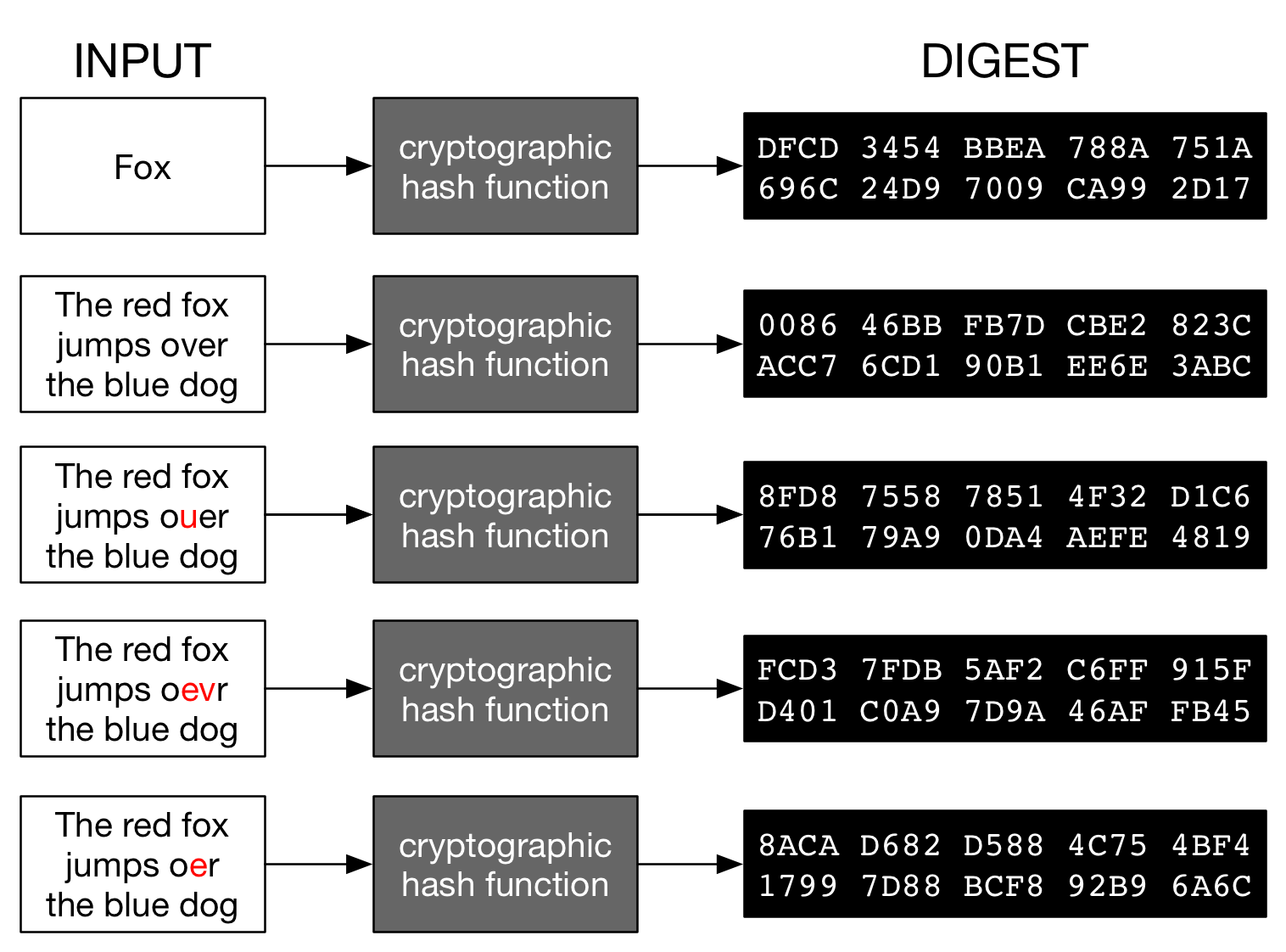 Any modification in the input - the text, the length or the order of the characters - will produce a totally different output from what was expected.

The digital signature process may occur with or without a manifest file. The manifest is a file that stores the hashes of other files, the ones for which the process is trying to secure the integrity and authenticity. With the manifest it is not necessary to ‘sign’ every file because the hashes of the files are in the manifest, so this is the only file that needs to be digitally signed. The digital signature will be stored in another file, one that usually has the file extension .asc or .sign.

a) The hash (digest) of the file (GZIP, in the schematic) is generated

b) The hash is stored in a text file manifest.txt, that contains the name of each file and its corresponding hash 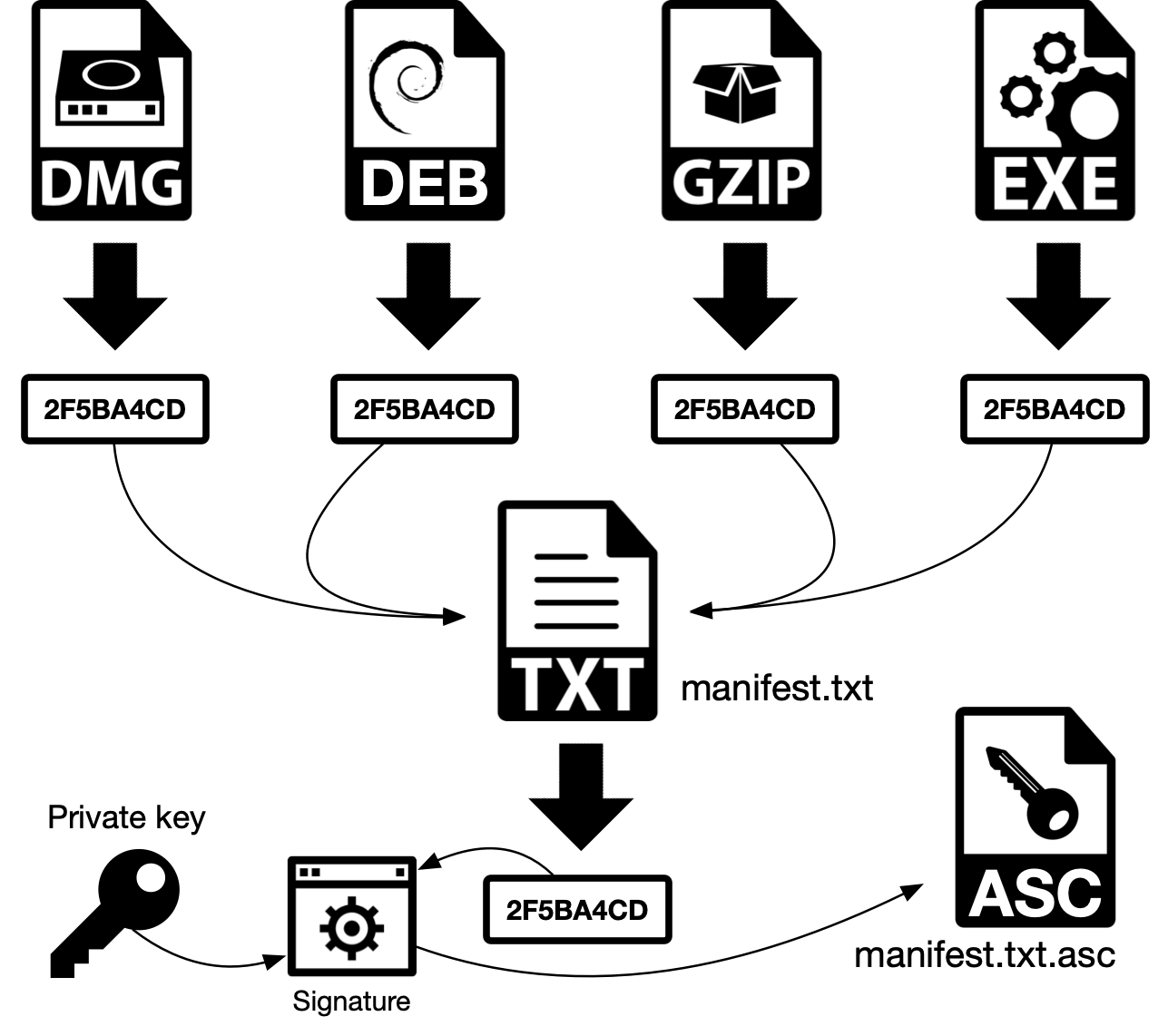 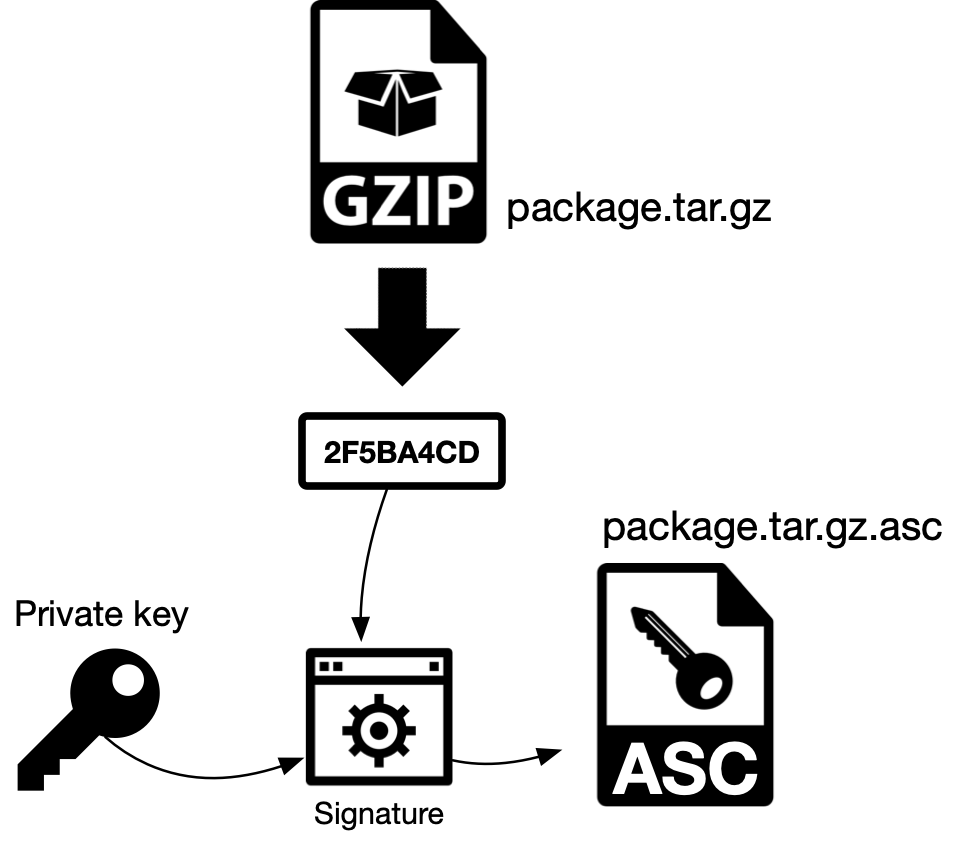 a) The verification process generates a hash of the manifest manifest.txt.

b) The signed hash (encrypted hash) manifest.txt.asc is decrypted using the sender’s public key and the original hash is obtained. If both hashes are equal, the message wasn’t altered and the sender is who we think he is, because this public key could not decrypt a hash encrypted with a private key from another pair. In asymmetric cryptography both keys from the same pair are used. The process started with one key and ended with the other one.

c) The user generates a hash of the file package.tar.gz (GZIP, in the schematic) and compares with the hash stores inside the manifest manifest.txt. If both hashes are equal, the file wasn’t modified. 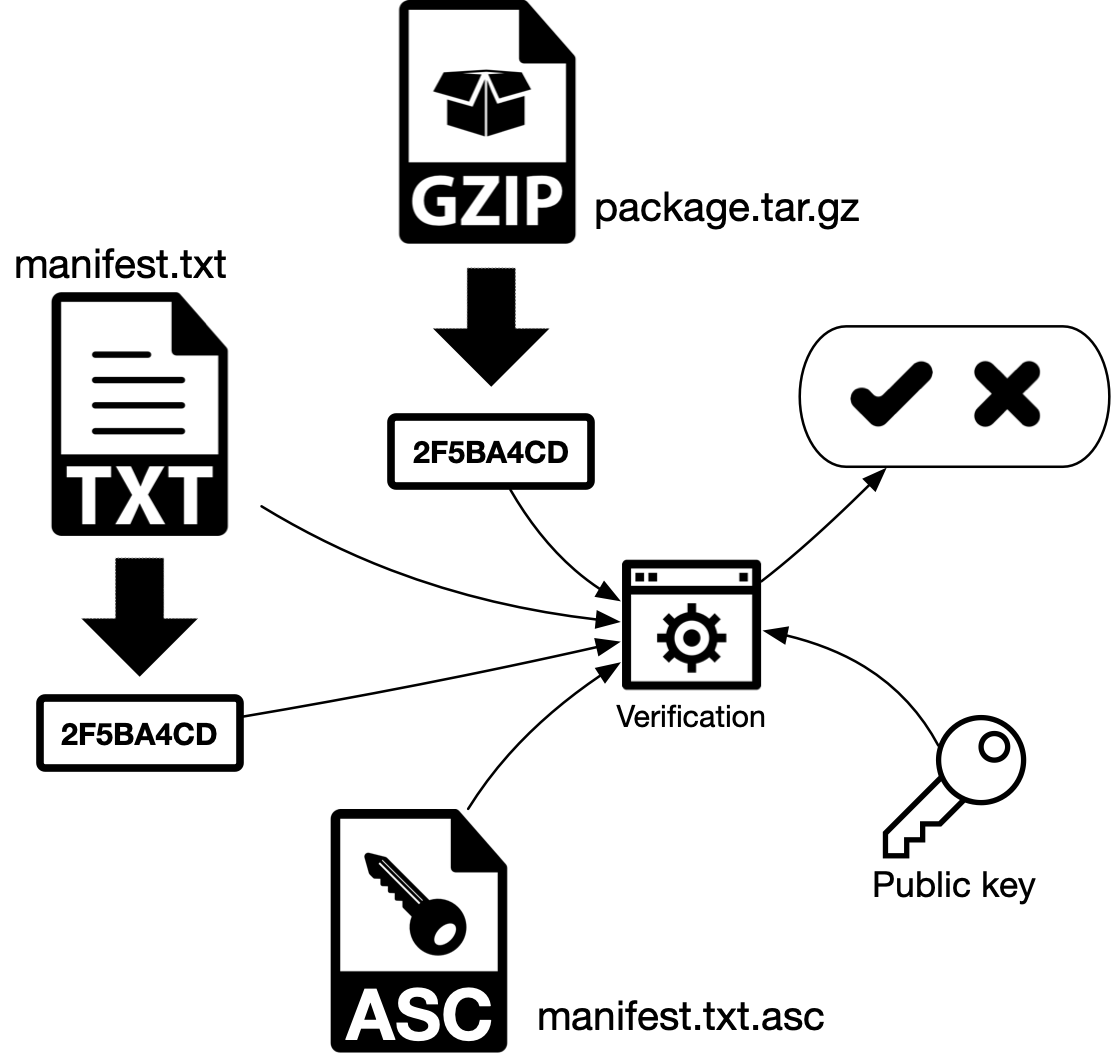 a) The verification process generates a hash of the downloaded file package.tar.gz (GZIP, in the schematic).

b) The signed hash (encrypted hash) is decrypted using the sender’s public key and the original hash is obtained. If both hashes are equal, the message wasn’t altered and the sender is who we think he is, because this public key could not decrypt a hash encrypted with a private key from another pair. In asymmetric cryptography both keys from the same pair are used. The process started with one key and ended with the other one. 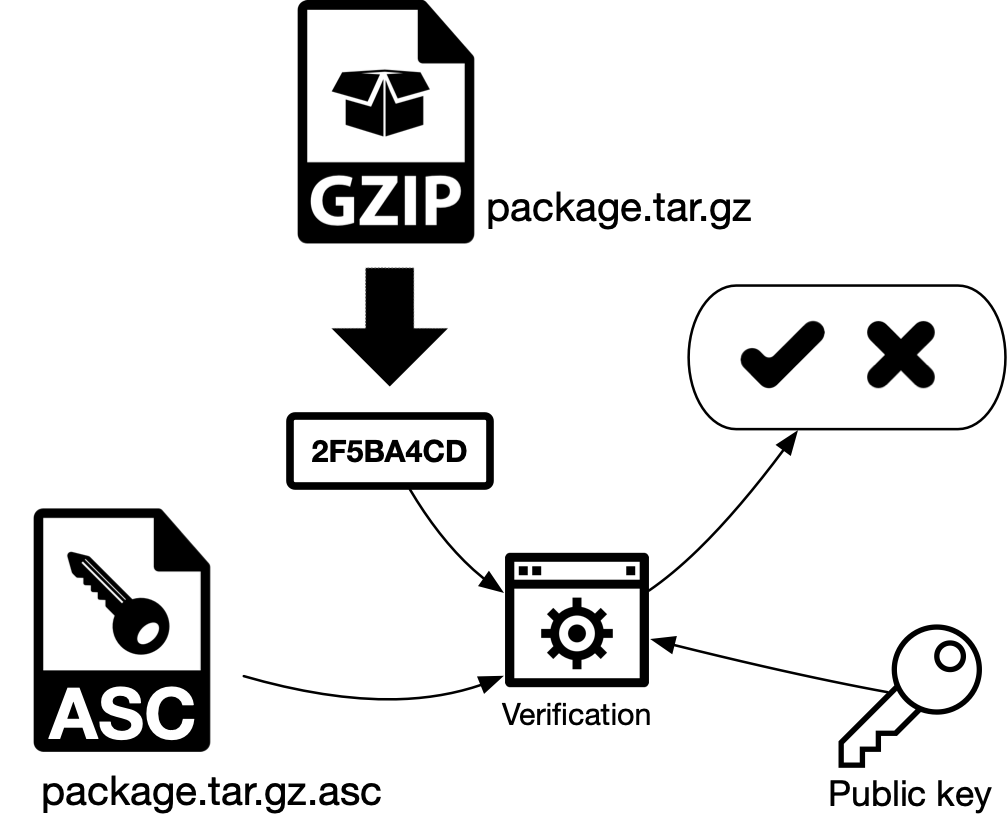 The risks change accordingly to the software that may have been compromised. In the case of cryptocurrency wallets it is possible that the attacker copy the seed or the private key to transfer all the resources to other addresses. In other cases the threats include information leakage, unauthorized access to user-stored information and even remote access or privilege escalation depending on the malicious code inserted into the original software.

Don’t install or use software without first verifying its digital signature.

This recommendation is related to software in general. Even the most simple software, like calculators or text editors, that don’t need administrative credentials to install or execute, may contain malicious code that exploits a vulnerability in the operating system or kernel. The broader recommendation should be: do not install untrusted software in your device, and when you decide to install something, download it from official sources and verify its digital signature, if possible.

Learn more about the verification of digital signatures for:

These steps may be used to verify any downloaded software from the Internet. The user will have to import the developers’ public key (hopefully all this information will be displayed in the website). Usually public keys are imported once, then again only if the key pair is revoked or replaced.

Learn more about this verification on macOS and Linux update process: